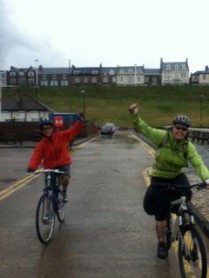 The most recent fundraiser, held on the 6th and 7th September 2019 saw John, their younger son Bobby and six other nsif supporters, cycle an impressive 262 miles from the Severn Bridge to the Humber Bridge. The team of cyclists were even welcomed home with a nsif celebratory cake!

Angela and John’s goal for 2019 was to reach the milestone of raising a total of £100,000. The Bridge to Bridge Challenge has enabled them to achieve this landmark.

We are incredibly grateful for the continued support of Angela and John, as well as the team of cyclists who completed the challenge last month!!

As you may be aware, we have faced some challenges this year due to the ground-breaking nature of the Wroclaw Walk Again Project in Poland. In 2018 we were notified that the project must adhere to EU legislation issued by the European Medicines Agency (EMA).This is because the procedure developed by the UCL team requires the manipulation of human tissue as a treatment for paralysis as a result of SCI.

The use of human tissue understandably means that the process should be very tightly regulated, as with any pharmaceutical destined to treat human beings. In order to satisfy the EMA’s criteria, new high-tech machinery had to be purchased and upgrades made to the laboratory’s ventilation system.   It is planned for the machinery to be in place by the close of 2019. At this point applications to several regulatory bodies, including the Polish Ministry of Health, will be required in order to proceed.

When all approvals have been granted, the project will advance full steam ahead, but this time with the backing of the EMA, whose job it is to foster scientific excellence in the evaluation and supervision of medicines. Gaining certification from the EMA is no small feat. Overcoming the hurdles presented, whilst time-consuming, ultimately gives the project even greater credibility within the scientific community.   The second patient has already received a full course of pre-operative rehabilitation. After examination by the team of world-class independent assessors, no signs of improvement have been noted. This means any improvements to sensation or movement will be as a result of the surgical procedure, not spontaneous recovery.

Due to the delays outlined, the patient will undergo another short course of rehabilitation to ensure they are at optimum fitness ready for the procedure.  It is hoped that this will take place in the first half of 2020. As with the first patient, Darek Fidyka, it will take nine to twelve months before the team are able to observe signs of sensory improvement. Only then will we be able to gauge how successful the procedure has been.   We are incredibly excited about the future and proud of all the efforts made by the teams at UCL and out in Wroclaw. Since Darek’s procedure, new innovations have been developed to improve both the cell transplantation technique and the surgical procedure that will be used. As a result of these developments, it is expected that outcomes will surpass those previously achieved.