OFF DUTY COOK BOOK - For the perfect present and a great way to support nsif. Please see

We are delighted to have the support and sponsorship of local company, Portable Building Sales Limited, and are pleased to recommend their services.

Having been a loyal supporter of the charity for a number of years, their further very generous donation of £2,000 for the Bridge to Bridge 3 cycle challenge has enabled us recently to surpass the milestone of £100,000 raised by nsif Hull & ER since inception. Please see:- 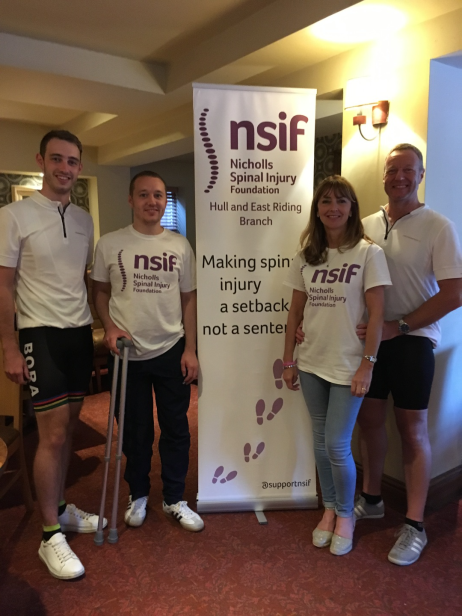 John and his wife Angela have been supporting the charity since 2011. Based in Yorkshire, the nsif champions have held several popular fundraisers over the years, including race nights, competitions, running events, fashion shows and cycling challenges.

The most recent fundraiser, held on the 6th and 7th September 2019 saw John, their younger son Bobby and six other nsif supporters, cycle an impressive 262 miles from the Severn Bridge to the Humber Bridge. The team of cyclists were even welcomed home with a nsif celebratory cake!

Angela and John’s goal for 2019 was to reach the milestone of raising a total of £100,000. The Bridge to Bridge Challenge has enabled them to achieve this landmark. The event in isolation raising £6,538, takes the total raised by the Hull & East Riding branch over the years to a huge £102,348!!

We are incredibly grateful for the continued support of Angela and John, as well as the team of cyclists who completed the challenge last monthh!!